With a community of 10 million subscribers, the founder of the YouTube channel FastGoodCuisine, also known as Charles Gilles-Companion, is launching his Pepe Chicken restaurant brand almost simultaneously in 5 cities to start with Taster’s live support. A chef by training, the star of the networks has created his own recipes based on fried chicken, tenders and, of course, burgers, which he intends to offer to all his fans and throughout France.

That’s it, in a few days Paris, Reims, Meaux, Rouen and Lille will have their own Pepe Chicken! Nice followed on 6 December, followed by Toulon, Nantes and Nanterre on 13 December. A veritable wildfire for what is already showing up as a phenomenon on delivery platforms, stirred up by that same media youtuber. Charles Gilles Companion. ” The start is such that from the first evening we sold the stocks planned for 4 days. But we are good today “, the entrepreneur explains to snack.fr. A real tidal wave!

At 27 years old, Charles is not at his first brilliance, as having barely graduated from hospitality school in 2012 with CAP and BTS in his pocket, he has already created his Youtube channel FastGood Cuisine, which quickly found its audience. At the time, he says, he just wanted to offer recipes for those who didn’t know how to cook or replicate their fast food experience at home. The success is such that the young man who multiplies the video now regularly hits tens of millions of views per sequence, with a record of 11 million for his famous candy recipe in 2016. The same publishing success as his work.” FastGood Cuisine – quick, easy and healthy recipes “, after ” FastGood Cuisine – Healthy and Gourmet Cuisine He has since claimed that all networks combined have amassed nearly 1 billion views. Exceptional virality that has not escaped Taste which opened its model, its logistics and operational support, and its experience to launch its brand. A good claw is still in the operator’s portfolio.

“Through Pepe Chicken, I get a completely different fried chicken experience that I want to offer to people who follow me.” Charles Gilles-Companion is the founder of Pepe Chicken.

Recipes were kept for 1 year.

pepe chicken, contrary to what one might think, this is not a nominee, but a dream come true and a culinary adventure, defends Charles, who explains to us how, since he was 4 years old, he knows that he will have his own restaurant (s). This is why, logically, an Alsatian should complete a professional catering course at the Lycée de l’Hôtellerie et du Tourisme Joseph Storck before making the switch to digital. But, he says, he never strays too far from the pleasures at the table. If a person of networks develops a rather virtual fate, the idea of ​​creating his own concept does not leave him. And it is in 2020 that he begins to act, developing his project, fueled by his travels outside the world, and which will make sense for his community. ” I learned what real flavored fried chicken is; I wanted to have my own recipes inspired by real American fried chicken. “. Many tests of marinades, breadings and sauces will later achieve the perfect balance and real corporate identity. Moreover, his recipes for sauces and breadcrumbs remain a secret. As for the name, it will be a tribute to his grandfather, who gave him a taste for cooking, Pépé Chicken with a short offer of tenders, chicken burgers and wings, all offered in a classic or spicy version and accompanied by french fries, french fries, sweet potatoes, french fries wafers, Tater Tots, corn, garnished with homemade sauces: creamy barbecue, original pepe sauce, green sauce and spicy pepe sauce. 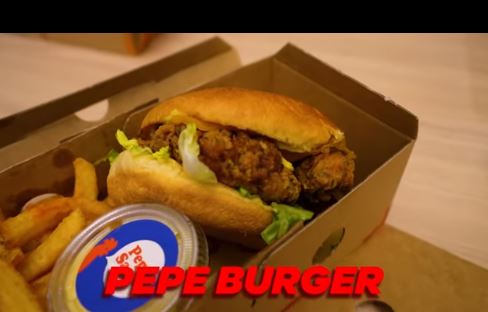 With a premium position in the portfolio of Taster brands, Fastgood chicken burgers, offered on platforms from 10.90 euros without menu formula, intend to prove their difference, and tomorrow their leadership. An entrepreneur who thinks big would like to settle where society demands it. That is, all over France, and no doubt, as the taster model suggests, with many restaurateurs looking to diversify and find growth drivers. If the brand is doing well (and there seems to be no evidence to the contrary), Charles quickly sees 1-2 openings per week, and why not, as much as he wants to, open a food truck to cater to those who still located in white areas and who can not be delivered.

And don’t forget to share this article, if it has brought you something, with your community!